In May 2005, the Australian Government introduced amendments to the Maritime Transport Security Act 2003 in Federal Parliament in an effort to further secure the nation's maritime and offshore industries. These amendments have led to the introduction of Maritime Security Identification Cards (MSIC) which ensure that those working in these critical industries are subject to appropriate background checking as now occurs in the aviation industry.

As a nationally recognised form of maritime and offshore industry identification, the MSIC distinguishes the holder as having met the minimum background checking requirements. It is essential for all maritime industry workers and contractors who operate within maritime security zones at ports, ships and oil and gas facilities.

Since 1 January 2007, all personnel requiring unmonitored access to a maritime or offshore security zone are required to display an MSIC. 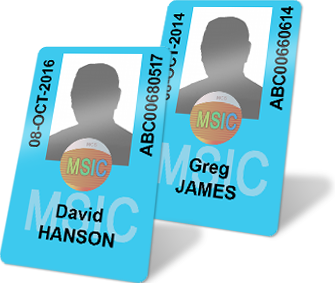